The Lowdown on Rhodiola Rosea: Does This Herb Help Athletic Performance?

Contents show
1 Rhodiola benefits
2 Does Rhodiola have stimulant properties?
3 Who can take rhodiola?

Rhodiola Rosea (Rhodiola) is an herb originating from the cool, mountainous regions of Asia and Europe. Rhodiola is thought to be a plant that contains bioactive compounds that work to support the body’s natural stress-fighting mechanisms. Needless to say, Rhodiola has seen extensive use as a traditional medicine in Europe and Asia for practically millennia.

Rhodiola’s benefits are based on how the body handles cortisol, or what is known as the “stress hormone” that the adrenal glands produce.

Concentrations of cortisol are known to be higher in the morning. This is thought to be a holdover from the time when most humans woke up in the morning as the sun rises, which would then signal them to start hunting for food and shelter. These comprised the stressors of early man, therefore requiring a tremendous amount of concentration, stimulation, and a heightened sense of alertness—all of which are driven by the release of cortisol in the bloodstream.

Thus, while cortisol is closely linked to stress, it isn’t inherently bad for you—it’s a perfectly understandable source of healthy stress for us. And, within the right context, cortisol release can help you concentrate on accomplishing the tasks you need to do and remain productive while doing so.

Humans have evolved such that cortisol levels diminish as the day goes on and as the day draws to a close so that the body can adequately rest and recover as necessary. But with the rise of technology and creature comforts like television, smartphones, tablet PCs, and mobile devices, so has our tendency to produce more cortisol, leaving us in a constant state of stress all throughout the day and well into the night. 24/7 stress is extremely unhealthy for the body, and it can do a number on your adrenal glands.

Adaptogens like Rhodiola support the adrenal glands, helping cortisol output so that the glands don’t have to work doubly hard.

Paired with better stress hygiene such as having not keeping a television or mobile devices inside your bedroom, rhodiola and the adaptogens of its ilk may help support your adrenal system. This will enable you to get the most benefits from the daily and natural increase of cortisol you encounter every morning.

Rhodiola might just be what men who perpetually feel tired or unfocused need in order to benefit from the natural cortisol boost—and therefore the cognitive and mental acuity—that the hormone itself offers.

Rhodiola is highly touted as a supplement for managing stress and boosting overall performance.

Studies have been conducted showing that Rhodiola might be beneficial for the following reasons:

Rhodiola also has demonstrated promising results for individuals engaged in extended physical activity or exercise. Rhodiola appears to improve work capacity in subjects who were in the process of training for endurance, as shown in a study published by the International Journal of Sports Nutrition and Exercise Metabolism. Rhodiola consumption delayed the subjects’ combined time before exhaustion by nearly a full 25 seconds.

Does Rhodiola have stimulant properties?

Rhodiola can be categorized as having a stimulative effect due to its ability to combat feelings of exhaustion. It is thought that rhodiola does this by promoting neurotransmitter activity involving compounds such as dopamine, serotonin, and adrenaline—all of which play integral roles in the body’s physiological, cognitive, sexual, and perceptive processes.

But what needs to be said is that rhodiola is not like most stimulants because it doesn’t appear to boost the heart rate or raise blood pressure, or otherwise reduce appetite as other traditional “stimulants” do. Rhodiola doesn’t amplify the central nervous system’s activity as stimulants like caffeine would, but rather helps the body regulate and adequately respond to stressful situations.

Doctors recommend taking rhodiola supplements in the morning to help manage cortisol. Taking it before sleeping or at night may lead to an increase in cortisol levels at a time when it should be lessening. Consult your doctor if you wish to explore what rhodiola can do for you.

Who can take rhodiola? 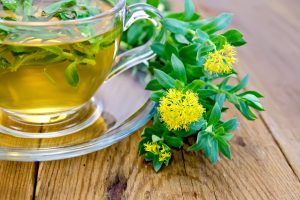 In otherwise normal, healthy adult populations, Rhodiola appears safe and at least provides some mild effect in most healthy adults. Rhodiola is a great companion for athletes, active individuals who exercise regularly, and practically anyone who wishes to handle function-impairing stress.

Like most adaptogens, Rhodiola can be taken in several forms, all of which can be rotated and paired with other adaptogens for maximum effect. One of the supplements that successfully combines an expert formulation of over 12+ high-quality adaptogens for testosterone support and performance enhancement is Male UltraCore, UltraCore Supplements’ flagship product.

Rhodiola may present mild side effects in some individuals in the form of vertigo and dry mouth—and its relative lack of adverse effects thus far throughout ongoing research into the adaptogen makes Rhodiola a tantalizing supplement that may help not just mood and cognition, but also provide the energy boost we all so need as we age.

Are Bodyweight Exercises Sufficient to Get Fit?

5 Back Exercises You Should Probably Do More...

How to Tell If You Are Exercising Too...

How to Get in Shape the Natural Way

4 Steps To Relieve Muscle Soreness After A...