What Men Need To Know About Thrush And Balanitis

We usually think of thrush as a woman’s disease, but it can actually affect men, too. Indeed, the prevalence of thrush or candidiasis is higher in women than men. As many as 75% of women experience candidiasis or thrush at least once in their lifetime.

However, as many as 10% of men suffer from balanitis, and the fungal yeast Candida albicans is the leading cause of balanitis. Moreover, if you have vaginal sex with a woman who has thrush, you’re likely to get infected too. Read on to know more about thrush and how it can cause balanitis in men.

More than 20 Candida species can cause yeast infections in humans, however, the species Candida albicans is the most common culprit. Candida is actually a type of yeast, and we all normally have it in our intestinal tract as well as on our skin and mucous membranes. It only causes an infection if there’s an overgrowth of these fungi.

Symptoms Of Thrush In Men

Sometimes thrush doesn’t cause any symptoms in men. If you’re lucky and you’re not experiencing any symptoms, then you may not necessarily need treatment. However, if the overgrowth of Candida is so overwhelming that it causes several symptoms to manifest, then you’ll definitely need to get medical assistance.

What’s inconvenient about thrush is that it can cause a foul smell to emanate from your penis. And it can cause pain when you’re having sex or while you’re urinating. You may also experience itching around the head of your penis. 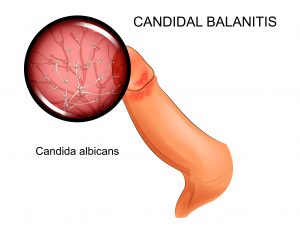 Aside from itching and soreness, you may also notice a blotchy rash or white patches on your penis glans. The skin on the affected area may also appear dull, glazed, and reddish. Moreover, thrush can also cause the head of your penis to become inflamed, a condition known as balanitis.

Balanitis is a condition that usually affects boys under 4 years of age and it’s also common among uncircumcised men. Not all cases of balanitis are caused by candidiasis. Circinate balanitis, one of the three types of balanitis, is usually caused by reactive arthritis.

Another type of balanitis, referred to as Pseudoepitheliomatous keratotic and micaceous balanitis, causes wart-like lesions to form on the penis glans. The lesions are typically scaly in appearance.

Zoon’s balanitis, on the one hand, is the most common type of balanitis affecting uncircumcised adult men, especially those who are middle-aged or elderly. This type of balanitis causes your foreskin and the head of your penis to become inflamed.

If balanitis is not due to candidiasis, you may experience additional symptoms such as sores on your penis glans. Your glands near your penis may also become swollen. And you may find it difficult or painful to retract your foreskin.

Medications for thrush are readily available, usually in the form of oral medication or topical creams, and some can be bought over-the-counter. If you have candidiasis, your doctor may prescribe clotrimazole, miconazole nitrate, or econazole nitrate.

Topical creams for candidiasis are typically directly applied to the affected area. Examples of topical medications for thrush include nystatin and imidazole. Although these medications are available online, you should consult a doctor before trying these treatments if it’s your first time to be infected with thrush.

For candidal balanitis, doctors usually prescribe clotrimazole or miconazole antifungal creams. However, if balanitis is caused by an allergic reaction, your doctor may give you a mild steroid cream instead. If balanitis is accompanied by bacterial infection, you may be given a prescription for antibiotics. 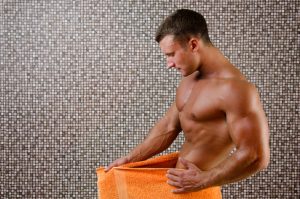 Most of the time, practicing good genital hygiene is enough to ward off balanitis. For instance, you can simply regularly wash your penis with warm, running water. Bacteria and yeast love moist places, so you should carefully dry your penis after washing so that no excess water remains.

When you’re washing your genitals, try to avoid perfumed soaps or shower gels. These products can cause irritation to your penile skin and can contribute to balanitis. Other irritants that can also lead to balanitis include chemicals used in lubricants and condoms, as well as fabric conditioner or detergent that are not properly rinsed off.

You may also want to wear loose-fitting underpants. This will help keep your genital area cool and dry. And after you urinate, make sure that you gently dry off the underneath of your foreskin. Of course, wearing protection whenever you engage in sexual activities can help you ward off candidiasis as well as other STDs.

Keeping yourself free from STDs and your penis physically healthy are not the only things you need to do in order to remain sexually healthy. Another way to maintain your sexual health is by making sure that your sex hormone levels are balanced well.

If you need help raising your testosterone levels, you should try a natural male sex enhancement supplement. One of the best supplements for increasing testosterone production, it is popular for its effectiveness in enhancing sexual desire and improving erectile function.

It is formulated using the best natural ingredients for treating erectile dysfunction and increasing male sexual prowess. Tribulus terrestris, Butea superba, and muira puama are just a few of the amazing main ingredients contained in it. These herbs are all known for their potency in boosting sexual performance.

This also contains Tongkat Ali, a well-known adaptogen and ergogenic herb that’s also popular for its testosterone-boosting and libido-enhancing properties. Tongkat Ali is considered one of the best herbs for increasing male sexual vigor. Plus, Tongkat Ali also has pro-fertility properties, so it’s really good for your sexual and reproductive health.

4 Delicious Foods For Your Anti-Estrogen Diet

7 Penis Problems Every Man Should Be Wary Of